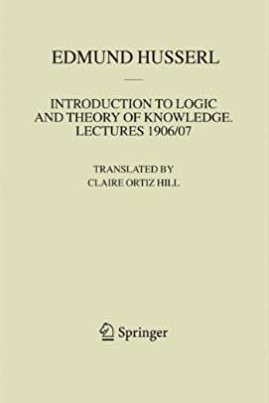 Introduction to logic and theory of knowledge

This course on logic and theory of knowledge fell exactly midway between the publication of the Logical Investigations in 1900-01 and Ideas I in 1913. It constitutes a summation and consolidation of Husserl’s logico-scientific, epistemological, and epistemo-phenomenological investigations of the preceding years and an important step in the journey from the descriptivo-psychological elucidation of pure logic in the Logical Investigations to the transcendental phenomenology of the absolute consciousness of the objective correlates constituting themselves in its acts in Ideas I.In this course Husserl began developing his transcendental phenomenology as the genuine realization of what had only been realized in fragmentary form in the Logical Investigations. Husserl considered that in the courses that he gave at the University of Göttingen he had progressed well beyond the insights of the Logical Investigations. Once he exposed the objective theoretical scaffolding needed to keep philosophers from falling into the quagmires of psychologism and skepticism, he set out on his voyage of discovery of the world of the intentional consciousness and to introduce the phenomenological analyses of knowledge that were to yield the general concepts of knowledge needed to solve the most recalcitrant problems of theory of knowledge understood as the investigation of the thorny problems involving the relationship of the subjectivity of the knower to the objectivity of what is known. This translation appears at a time when philosophers in English-speaking countries have heartily embraced the thoughts of Husserl’s German contemporary Gottlob Frege and his concerns. It is replete with insights into matters that many philosophers have been primed to appreciate out of enthusiasm for Frege’s ideas. Among these are: anti-psychologism, meaning, the foundations of mathematics, logic, science, and knowledge, his questions about sets and classes, intensions, identity, calculating with concepts, perspicuity, and even his idealism.

Noetics as theory of justification of knowledge

Theory of knowledge as first philosophy

Phenomenology as science of pure consciousness

The lower forms of objectification

The higher forms of objectification

Is this table of contents incomplete? Click here to add the missing references