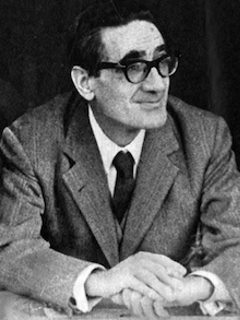 Giulio Preti was an Italian philosopher, active in Milan, Pavia, and Firenze. A student of Antonio Banfi and one of the most prominent representatives, together with Enzo Paci, of the Milan School, he is especially remembered for his research in philosophy of science and for his efforts to integrate philosophical and scientific culture.

Both these aspects will be taken into account in the following. Moreover, in line with the project of this blog, we will dedicate special attention to the role that Husserl’s phenomenology played in the development of Preti’s philosophical reflection since the time of his graduation in 1933. In this regard, two elements of phenomenological philosophy are of particular importance for Preti: 1) the development of logical reflection; 2) the relationship between Leib and Körper, i.e. between live body and physical body. As to the first point, Preti designed an innovative logical discourse that ranges between scholastic linguistics (Petrus Aureolus and Peter of Spain) and modern semantics (Carnap and Moore). As to the second, he developed a moral reflection that identifies in the “live body” the starting point for engendering a Wertnehmung (i.e. a sensory and motive perception of values), while the “physical body” corresponds for him to a simple Wahrnehmung (i.e. a theoretical and cognitive perception of natural objects).

In the years following his graduation, Preti strengthened his friendly relations with Enzo Paci and Antonio Banfi. Under Banfi’s supervision, he published his first works: La fenomenologia del valore (Phenomenology of Value, 1942; available in our blog library), and Idealismo e positivismo (Idealism and Positivism, 1943). After the end of the Second World War, he moved first to Pavia and then to Firenze, where he got a position at the local university. In this period, he wrote Il cristianesimo universale di Leibniz (Leibniz’s Universal Christianity, 1952), and Linguaggio comune e linguaggi scientifici (Common Language and Scientific Languages, 1953), in which he clearly oriented his reflection towards logic. Moreover, in Praxis e empirismo (Praxis and Empiricism, 1957), he attempted a combination between Husserl’s phenomenological standpoint and his own research on empiricism.

In order to understand the evolution of Preti’s reflection, one has to consider two main elements. First, the development of logical discourse, namely the way in which he tackled the problem of the constitution and use of rigorous logical methods, by intermingling phenomenology and logical empiricism. Second, the semantic correlation between immanence and transcendence, in light of the concept of logical intentionality that Husserl had the merit to rediscover, and that Preti addressed by intertwining phenomenology with neo-Kantianism and Banfi’s critical rationalism. According to Preti’s perspective, the knowing subject does not stand opposite – as it was for Banfi – to the abstract objects that belong to human tradition, but is rather conceived as the “embodied” human being, who lives “here and now”, in and for the world, and who does not correspond to a hypostasized subject. This vision develops coherently throughout Preti’s philosophical reflection, which results from a contamination of neo-empiricism with critical rationalism, and whose most original formulation corresponds to the critical program of “logical neo-realism”, as it emerges in Preti’s posthumous essays (see on this Fabio Minazzi, Suppositio pro significato non ultimato. Giulio Preti neorealista logico, Milano 2011; Sul Bios theoretikós di Giulio Preti, ed. F. Minazzi, 2 vol., Milano 2014).

In what consists Preti’s perspective? Banfi had showed that, in order to observe and analyze the correlative aspect of the link between subject and object, one does not have to define these two elements as simple hypostases. On the contrary, according to Husserl’s position, one has to take into account the problem of their constitution, of their immediate actuality, suspending any other judgement. Phenomenological analysis provided Preti with a method that allowed him to correctly integrate the transcendental level, which fulfills the formal conditions for thinking what is real, and the empirical level, in which the validity of theories is verified on the basis of facts (a critically mediated neo-empiricism). In this sense, theories are conceived as expressions of statements that one can achieve by recurring to rigorous logical proceedings, which translate into linguistic signs (logical neo-realism). These signs organize and make communicable a field of experience that in this way becomes meaningful. In logical terms, the concept does not simply refer to a name (as in realism), neither the name stands for the content (as in nominalism). Rather, according to Preti’s logical neo-realism, the name is filled with a content that does not exhaust the concept. The esse apparens, obiectivum or intentionale, according to Medieval scholastics, is a way of being of the subject, an aspect of it, which does not therefore coincide either with the object as such, nor does it belong to the knowing subject in an ontological way. Therefore, the cognitive act is one thing, and the known object is another; the phenomenon of knowledge is one thing, the object of knowledge is another. Minazzi recollects in this regard what Preti wrote in his essays on logical neo-realism: “‘Neorealism’ is a relatively new name standing for a very old doctrine. It is a standpoint that, as a matter of fact, the author of these essays derived from the meditation and discussion about the most strictly philosophical (theoretical) problem of analytic philosophy, logic, and contemporary epistemology (Moore, Russell, Carnap, Ayer, etc.), and that he tackled in light of the early reflection of Husserl (Logische Untersuchungen and Ideen). It is a standpoint, however, that refers back to fourteenth century scholastics” (F. Minazzi, Suppositio pro significato non ultimato, 159).

In other words, even though the content of experience is real, it is so in a new, non-dogmatic way, i.e. as the result of the translation of the world in logically valid terms, which reflection actualizes (see on this, Preti, Retorica e logica [Rhetoric and Logic], 1968). Subject and object are therefore only constituted in the very act of knowing, as one moves towards the other, forming an intersubjective field of experiences, which is always historical and relative. Objective reality, according to logical neo-realism, is that which I can see – in a Kantian perspective – in a given moment and under certain circumstances. In this regard, Mario Dal Pra underlined how, in this perspective, “the formal structures are understood as constitutive of a historical and objective a priori, and they are seen in their operative function” (M. Dal Pra, Studi sull’empirismo critico di Giulio Preti, Napoli, 1988, 34). Philosophical analysis is therefore capable of integrating, in the intellectual activity, formal criteria and empirical verification, and in so doing it can create a unitary meaning of culture.

In his essay on the Milan School, Fulvio Papi wrote that for Preti “[…] either philosophy becomes literature, namely an expression of the relation between I’s and world (and this seemed to be to him, in a positive meaning, the way of existentialism), or it becomes a unitary epistemology of scientific thinking, reasserting in this way the continuity of its theoretical tradition” (F. Papi, Vita e filosofia. La scuola di Milano: Banfi, Cantoni, Paci, Preti, Milano 1990, 245). Understood as a unitary epistemology, philosophical analysis thus becomes an investigation of Leibniz’s mathesis universalis, which one organizes following a logical model that, however, even though it is universal with reference to the knowledge process, it is not so with regards to the object definition, as the formal structure of objectivity cannot be something necessary, but only possible. An object of knowledge can exist only insofar as it is historically organized in a discourse, in which experiences gather in webs or “regions” of notions, in which they acquire a meaning, as well as an “ontologically” recognizable dimension. Thinking is therefore understood as that extraordinary instrument, thanks to which humans can transform the world (in a Marxian sense) in a world made of laws and meanings.

Isolated from the academic circles, Giulio Preti died of a sudden illness in Tunisia, in 1972. Many of his unpublished writings are now available at the Archive in the Università dell’Insubria (Varese).