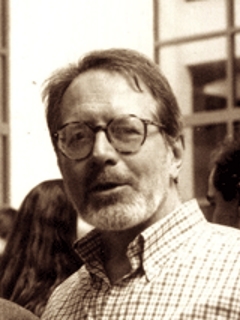 Milanese philosopher who lectured in theoretical philosophy at the University of Verona from 1968 until his death. A student of both Antonio Banfi and Enzo Paci, Neri is one of the last representatives of the Milan School, of which he brings together some of the most important topics, such as phenomenological investigation, historical and political analysis, aesthetics. Compared to his masters, whose thoughts he has deeply analyzed in his works, Neri develops an original line of research, characterized by a critique of twentieth-century ideologies and their collapses, and by a non-dogmatic reading of contemporary history, aimed at highlighting its setbacks and aporias.

Earth and sky: An analysis of Husserl's 1934 manuscript on "The spatiality of nature"

Guido Davide Neri (1935-2001) was a Milanese philosopher who lectured in theoretical philosophy at the University of Verona from 1968 until his death. A student of both Antonio Banfi and Enzo Paci, Neri is one of the last representatives of the Milan School, of which he brings together some of the most important topics, such as phenomenological investigation, historical and political analysis, aesthetics. Compared to his masters, whose thoughts he has deeply analyzed in his works, Neri develops an original line of research, characterized by a critique of twentieth-century ideologies and their collapses, and by a non-dogmatic reading of contemporary history, aimed at highlighting its setbacks and aporias. By combining skeptical insight and phenomenological epoché, Neri retraced the adventures of Marxist dialectics, particularly focusing his attention on Central and Eastern Europe, and on the various forms of protest and dissidence that, starting from the 1960s, originated in this historical context. Neri’s keen interest in the reflections of Husserl, Merleau-Ponty, Bloch, Lukács, Kosík, Kołakowski, reveal the tension between his theoretical and practical investigations, as it develops throughout all his works: from his monographs to his essays, mainly published in journals such as aut aut and Il filo rosso, as well as in his unpublished writings, which are now archived in the Fondo Guido Davide Neri, at the University of Milan.

During his university years, which he spent in Pavia and Milan, Neri had the chance to attend classes taught by Banfi – who in that period was already far from phenomenology and intent on perfectioing (and radicalizing) his Marxist humanism – as well as by Paci, who in those same years started an innovative investigation into Husserl’s late output, and in particular into the Crisis of European Sciences, which he made the subject of numerous courses. This sort of “phenomenological apprenticeship” (in the words of Luciano Fausti) allowed Neri to learn a research method which later emerged not only in his works on Husserl, Merleau-Ponty, Patočka (of whom he edited and translated various works), but also in his analysis of twentieth-century historical and political thought. Besides these domains, Neri had also a keen interest in art and aesthetics, as it emerges mainly in his early research, and which was essentially due to the teaching of Dino Formaggio, who supevised Neri’s master thesis in 1957. Neri developed these topics also in the following years: he wrote several works on Panofsky (see for example his edition of Panofsky’s La prospettiva come forma simbolica e altri scritti) and on Caravaggio, and focused in particular on the relationship between phenomenology and aesthetics.

After his university years, a new phase of Neri’s work begins, which led him in the early 1960s to Prague, for a research stay at the Czechoslovak Academy of Sciences, and later on to the US, where in 1968 he was visiting fellow at the Pennsylvania State University. In Prague, Neri got in touch with the young generation of Czech intellectuals who, in those crucial years, pioneered the idea of a reform of socialism “from within”, starting with a deep re-interpretation of Marx’s ideas of materialism and praxis. In the following years, Neri had the merit of introducing in Italy the works of philosophers such as Karel Kosík and Jan Patočka, who despite their differences shared Neri’s interest in phenomenology and politics. During his experience in the US, Neri dedicated to Marx a series of lectures and public talks, the still unpublished texts of which are now available at the Fondo Neri. In his analysis o Marx’s thought, Neri was equally influenced by Kosík’s interpretation and by Gajo Petrović and the Yugoslav Praxis school. Back in Italy, Neri started teaching in Verona, where he focused his classes on post-Husserlian phenomenology, Ernst Bloch, the philosophical idea of Europe, and its heritage after the setbacks of the political projects of the twentieth century. Some of his most well-known works are published during these years: Aporie della realizzazione (1980), on philosophy and ideology in the socialist countries, and Crisi e contruzione della storia (1984), once again dedicated to the figure of Banfi.

On various occasions Neri expressed his debt towards his Milanese masters for having introduced him to the study of phenomenology. In this sense, a fundamental passage in Neri’s development is the one from Banfi’s to Paci’s teaching. In Neri’s words: “The ‘desperate rationalism’ of phenomenology’s founder lost its centrality: the focus of our reading shifted to the ‘lifeworld’ and the critique of modern objectivism”. This new way of thinking was later embraced by a generation of young scholars who, over the 1960s, gathered around Paci, with the aim of sharpening a method of research that could allow them to re-establish a disenchanted, yet non-indifferent view of social and cultural reality, againt Banfi’s “suffocating rationalism”, but also against the cultural orientation dictated but the Italian Communist Party. Neri belongs to this new generation of thinkers, and this circumstance also explains his phenomenological perspective: “By highlighting the theme of the lifeworld – he states in another of his late essays – phenomenology proved to be capable of facing the problems raised by social and historical sciences, by cultural anthropology, an even by Marxist thought”. Nonetheless, Neri follows only in part the path opened by Paci, who strived to all intents and purposes to combine phenomenological method and Marxist dialectics. This same tendency is detectable in Neri’s early monograph from 1966, Prassi e conoscenza, where an entire section concerns Marxist criticism of phenomenology, but ends up fading in his later works, in which Neri gives up any conciliatory attempt, and rather undertakes a phenomenological critique of real-existing socialism and its distorsions. Inthis regard, the confrontation with Kosík and with the dissidence within the socialist states plays a fundamental role.

As it emerges in his 1980 book Aporie della realizzazione, Neri distinguishes two phases, and two generation of philosophers, in the complex crisis of socialism’s construction. On the one hand, the first generation is represented by György Lukács and Ernst Bloch. To the thought of the latter, to his conception of history and utopia and manifold reconsiderations, Neri dedicates a broad analysis, which he will further develop in the following years, as the syllaba of his university courses show. This book’s title, “Aporias of realizations”, stems as well from Bloch’s work, as Neri mines it from a page of Principle of Hope. It is precisely in the dialectics between reality and “realization”, between present situation and future hope, that Neri identifies the main trend of real-existing socialism, of its philosophy and ideology. Only with the second generation of philosophers, however,do  the aporias of the socialist realization finally come to light. Bloch’s melancholy gives indeed way to Kołakowski’s skeptical gaze, and to Kosík’s attempt to re-interpret Marxist dialectics in concrete terms, beyond only ideological lapse. Neri’s book on Banfi, Crisi e costruzione della storia, follows the same line of thought. The subject matter is again the “realization”, which is now understood in the terms of Banfi’s attempt to conceive historical becoming on a rational basis, in order to overcome the crisis of modern civilization and to open the way towards a new humanistic perspective. In light of Neri’s analysis, which focuses on the 1930s as the pivotal period in the development of Banfi’s theory, a new and particularly complex portray of Banfi emerges, in which his ideological turn and adhesion to dogmatic communism do not block out his persisting critical spirit and his European perspective, which allowed his reflection to span beyond the borders of Italian national philosophy.

A special mention goes to Neri’s unpublished papers that are now available for consultation, after the establishment of the Fondo Guido Davide Neri, at the Philosophy Library of the University of Milan. In this vast archival collection are filed Neri’s reflections, drafts for courses and seminars, travel notes, correspondences. Of particular importance in this corpus in view of the future scholarship on Neri, are his 149 notebooks, which consist of philosophical reflections dating from the mid-1950s until Neri’s death. By analyzing these notebooks, which are now consultable in their full length and whose digitization is in progress, it will become possible to clarify the relationship between Neri and other representatives of Milanese philosophy: from Banfi to Paci, from Dal Pra to Preti. Of major importance are also Neri’s comments on some of the most remarkable historical events of twentieth century, like the Soviet invation in Hungary in 1956, the Prague Spring, and the collapse of socialism, not to mention his reflections on the role of philosophy in society, on how to teach it properly, and on its importance, in light of today’s most shattering events.